The Southwest Memorial Hospital in Cortez, CO originally opened in 1914.  Today Southwest Memorial Hospital is a 25-bed critical access hospital offering the latest in medical and surgical technology, 24/7 emergency care, a vast array of out-patient medical and wellness services, and much more. Serving the Four Corners area, Southwest Memorial Hospital is staffed by more than 300 employees including highly trained and skilled physicians, nurses, technicians, administrators, and support staff in a variety of capacities.
Glimpse of History: The early years at Southwest Memorial Hospital
In 1914, Dr. Emil E. Johnson converted two cottages into a hospital on Main Street in Cortez. Dr. Johnson’s family lived on the premises where he had an office and an eight bed hospital.  Later in the mid-1940s, the citizens of Montezuma and Dolores Counties recognized that the current facility would not serve the future needs of the two counties. The community began raising money to build a new hospital. The drive had great community support, and by 1948 enough money had been raised to build a hospital on South Broadway, currently the Johnson Building. The new facility, Southwest Memorial Hospital, opened in May 1948 and was dedicated as a memorial to the veterans of Montezuma and Dolores Counties who were killed in World War II. The original plaque with the names of these men is located just inside the main entrance of the current hospital. 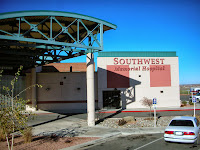 By the late 1970s it became obvious that the community had outgrown the facility and a new structure was needed. Through the Hill-Burton Act, the Federal government provided funds for construction of hospitals that would assume the responsibility of caring for patients without financial resources. A group of local citizens and the hospital board arranged to obtain funding through this program for construction of a new hospital. In the early 2000s, new services were added to the hospital including a wound care and an infusion center. Between 2008 and 2011 the hospital converted the South Campus building into several out-patient departments and administrative offices. The hospital also opened a sleep studies department, a rural health clinic, and a walk-in care clinic, launched a hospitalist program, and began implementation of a community-wide electronic medical record system.
Colorado Rural Health Center recognizes Southwest Memorial as October Member of the Month 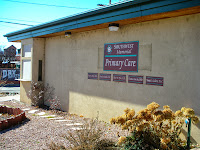 Southwest Memorial Hospital is an affiliate of Southwest Health System, Inc., a not-for-profit corpo­ration that is governed by a volunteer Board of Directors. The hospital has been a member of Colorado Rural Health Center (CRHC) for many years.  The hospital is one of CRHC’s highly engaged sites, participating in numerous programs, including; iCARE (Improving Communications and Readmissions), REC (Regional Extension Center) services, SHIP (Small Rural Hospital Improvement Program), and is contracted with CRHC’s Colorado Provider Recruitment program. In addition, the hospital’s affiliated rural health clinic has completed a healthy clinic assessment.  Staff and leadership from the hospital and clinics actively participate in numerous CRHC educational opportunities, including regional workshops, conferences and webinars.  CRHC is proud to recognize Southwest Memorial Hospital for their many accomplishments and for the outstanding level of care they provide in Cortez and the surrounding area.  To learn more about Southwest Memorial Hospital, visit their websiteor check them out on Facebook.
Share this article: